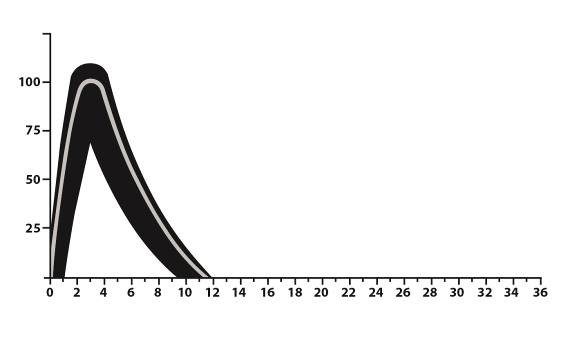 Pharmacokinetics.
Farmasulin® H is a human insulin produced using recombinant DNA technologies.
The pharmacokinetics of insulin does not reflect the metabolic activity of the hormone. Therefore, when considering the question of insulin activity, it would be more appropriate to study the glucose utilization curves (given above).
During the toxicological studies, no serious adverse effects associated with the use of the drug were identified.
Indications.
Treatment of patients with diabetes mellitus who require insulin to maintain normal glucose homeostasis.
Contraindications.
Hypoglycemia. Hypersensitivity to the active substance and to any excipients of the drug, with the exception of cases of desensitizing therapy.
Interaction with other drugs and other types of interactions.
Some drugs affect glucose metabolism, so you should consult your doctor about taking any other drugs with human insulin. The physician must take into account possible interactions if the patient is taking any medications.
The need for insulin may increase with the use of drugs with hyperglycemic activity, such as glucocorticoids, thyroid hormones and growth hormone, danazol, β2-sympathomimetics (eg ritodrine, salbutamol, terbutaline), thiazides.The need for insulin may be reduced with the use of drugs with hypoglycemic activity, such as oral hypoglycemic drugs, salicylates (eg, acetylsalicylic acid), some antidepressants (monoamine oxidase inhibitors), some angiotensin-converting enzyme inhibitors (captopril, enalapril), angiotensin II receptor blockers, non-selective β blockers or alcohol.
Somatostatin analogues (octreotide, lanreotide) can either increase or decrease insulin requirements.

Application features.
Any change in type or brand of insulin must be made under strict medical supervision. Changes in strength, brand (manufacturer), type (soluble, NPH, blended), type (animal insulin, human insulin, human insulin analog) and/or production type (DNA recombinant insulin or animal insulin) may require a change in dosage.
Dosage in the treatment of patients with human insulin may differ from the dosage used in the treatment of insulins of animal origin. The need for dose adjustment may occur from the first dose or within the first few weeks or months.
In some patients who have had hypoglycemic reactions after switching from animal insulin to human insulin, the early warning symptoms of hypoglycemia have been less pronounced or different from the symptoms previously observed in these patients treated with animal insulin. Patients with a significant improvement in blood glucose levels (for example, due to intensification of insulin therapy) may subsequently have some or none of the early warning symptoms of hypoglycemia, which should be reported to them. Conditions in which early symptoms of hypoglycemia may be nonspecific and less severe include long-term diabetes mellitus, nervous system disorders in diabetes mellitus, or medications such as β-blockers.Hypoglycemic or hyperglycemic reactions that have not been corrected can lead to loss of consciousness, coma or death.
The use of inappropriate doses or abrupt discontinuation of treatment, especially in insulin-dependent diabetes, can lead to hyperglycemia and ketoacidosis, conditions that are potentially fatal.
When treated with human insulin, antibodies can be produced, albeit at lower concentrations than with purified animal insulin.
The need for insulin varies significantly with diseases of the adrenal glands, pituitary gland, thyroid gland and in the presence of renal or hepatic insufficiency.
The need for insulin can also increase during illness or under the influence of emotional stress. The need for dose adjustment may arise in the event of a change in the intensity of physical activity or the usual diet.
This medicinal product contains less than 1 mmol (23 mg)/dose of sodium, i.e. practically free of sodium.
Combined use with pioglitazone.
Cases of heart failure have been reported with the combined use of pioglitazone with insulin, especially in patients with risk factors for heart failure. This information must be taken into account when prescribing a combination of Farmasulin® H with pioglitazone. Subject to the use of this combination, it is necessary to monitor the patient’s condition regarding the occurrence of symptoms of heart failure, weight gain and the appearance of edema.Treatment with pioglitazone should be discontinued if cardiac symptoms worsen.

Use during pregnancy or lactation.
Patients with insulin-dependent diabetes mellitus or with gestational diabetes receiving insulin therapy need careful monitoring throughout the pregnancy. The need for insulin usually decreases during the first trimester of pregnancy, after which it increases during the second and third trimesters. Patients with diabetes should inform the doctor about the onset of pregnancy or its planning.
During pregnancy, patients with diabetes require careful monitoring of blood glucose levels, as well as general health.
Patients with diabetes during breastfeeding may need to adjust insulin doses and / or diet.
The ability to influence the reaction rate when driving vehicles or operating other mechanisms.
The ability of patients taking insulin to concentrate and respond may be impaired as a result of hypoglycemia. This can become a risk factor when these abilities are of particular importance (including when driving vehicles or working with other mechanisms).
Patients should be informed about what precautions are necessary to avoid hypoglycemia while driving. This is especially important for those patients who have less or no warning signs of hypoglycemia, or who have frequent episodes of hypoglycemia. Under such circumstances, the feasibility of driving should be assessed.

Method of application and dose.
The dose is determined by the doctor depending on the needs of the patient.
Farmasulin® H is administered by subcutaneous injection using a reusable syringe pen for cartridges and insulin syringes for vials.
For intravenous administration, it is possible to use the drug Farmasulin® H in vials.
Subcutaneous injections should be performed in the shoulder, thigh, buttocks or abdomen. Injection sites should be rotated so that the same site is not used more than once a month.
During the introduction of the drug Farmasulin® H under the skin, you must be careful not to get into the blood vessel. After the injection, the injection site should not be massaged. Patients should be taught proper injection technique.
Directions for the use of the drug.
Cartridges.
Each pen/cartridge should only be used for one patient, even if the needle on the injection device is changed, to prevent the possibility of transmitting infectious agents.
Solution for injection in cartridges of 3 ml must be used with a syringe pen, which is marked “CE” according to the recommendations of the manufacturer of syringe pens.
The drug Farmasulin® H in cartridges does not require resuspension; it should only be used if the solution is clear, colorless, free of visible solids and looks like water.
Cartridges are not designed to mix different insulins. Empty cartridges cannot be reused.To load the pen cartridge, attach the needle, and inject insulin, refer to the insulin pen manufacturer’s instructions for injecting insulin.
Each time before using a new syringe pen, you should carefully read the instructions for use, because they may contain new information. This information does not replace the need to discuss the patient’s health status and prescribed treatment with a doctor.
It is not recommended to use the pen in patients with complete loss of vision or with impaired vision without the help of people trained in the correct use of the pen.
Vials.
Use an insulin syringe whose markings correspond to the dose of insulin being used. It is necessary to use a syringe of the same type and brand. Inattention when using a syringe can lead to erroneous dosing of insulin.
Dose preparation.
1) Before collecting insulin from the vial, it is necessary to check the transparency of the solution. If flakes appear, if the solution becomes cloudy, if a precipitate occurs or if the substance appears on the glass of the vial, it is forbidden to use the drug!
The drug Farmasulin® N does not require resuspension; it should only be used if the solution is clear, colorless, free of visible particles and looks like water.
2) Collect insulin from the vial, puncturing the stopper, previously wiped with alcohol, with a sterile syringe needle. The temperature of the injected insulin should be at room temperature.
3) Draw air into the syringe to the mark corresponding to the required dose of insulin, and then release the air into the vial.4) Turn the syringe together with the vial so that the vial is upside down, and dial the required dose of insulin.
5) Remove the needle from the vial. Release the syringe from the air and check the correctness of the dialed dose of insulin.
When carrying out an injection, asepsis rules should be observed. To avoid purulent-inflammatory complications, do not reuse a disposable syringe.
The introduction of the drug.
Administer the required dose of insulin as directed by your physician.
Children.
The dosage, schedule of administration and the number of injections for children are determined by the doctor, based on specific needs and according to each specific case.

Overdose.
There is no specific definition for insulin overdose because blood glucose levels are the result of a complex interaction between insulin levels, glucose uptake, and other metabolic processes. The cause of hypoglycemia can be an excess of insulin in relation to the amount of food taken and energy expenditure.
Manifestations of hypoglycemia are lethargy, confusion, palpitations, headache, sweating, vomiting.
Mild hypoglycemia can usually be corrected by oral administration of glucose or foods containing sugar. Moderately severe hypoglycemia can be corrected with intramuscular or subcutaneous glucagon followed by oral carbohydrates after the patient has stabilized. Patients who do not respond to glucagon administration should be given an intravenous glucose solution. If the patient is in a coma, then glucagon should be administered intramuscularly or subcutaneously. In the absence of glucagon or if there is no reaction to its administration, it is necessary to inject a glucose solution intravenously. The patient should be fed as soon as he wakes up.
There may be a need for maintenance carbohydrate intake and medical supervision, since after an obvious clinical improvement, relapse of hypoglycemia may occur.
Adverse reactions.
Hypoglycemia is the most common side effect of insulin therapy in diabetic patients. Severe hypoglycemia can lead to unconsciousness and, in extreme cases, death.A specific frequency of episodes of hypoglycemia cannot be established, as it is the result of both the dose of insulin and other factors, such as the composition of the patient’s diet and physical activity.
Local allergic reactions are often possible (frequency from 1/100 to < 1/10), including changes at the injection site: skin redness, swelling, itching. They usually go away within a few days to a few weeks. In some cases, this condition is associated not with insulin, but with other factors, such as irritants in skin cleansers or poor injection technique.
A systemic allergic reaction is very rare (< 1/10,000) but is potentially a more serious side effect and is a generalized form of insulin allergy. It can be manifested by a rash all over the body, shortness of breath, wheezing, low blood pressure, rapid heart rate, and increased sweating. Severe cases of generalized allergies are life-threatening. In exceptional cases of severe allergy to Farmasulin® H, appropriate measures should be taken immediately. It may be necessary to replace insulin or desensitizing therapy.
Lipodystrophy at the injection site occurs infrequently (frequency from 1/1000 to < 1/100).
Edema has been reported during insulin therapy, in particular in cases where previous poor metabolic control was improved by intensive insulin therapy.

Best before date.
2 years.
The shelf life of the drug in cartridges and vials after opening is 28 days at a temperature of 15 ° C to 25 ° C, protecting from overheating and sunlight. Cartridges that are in use should not be refrigerated.
Do not use the drug after the expiration date indicated on the package.

Storage conditions.
Store in the original packaging at a temperature between 2°C and 8°C (in the refrigerator). Do not freeze. Keep out of the reach of children.
Incompatibility.
Do not mix Farmasulin® H with insulins from other manufacturers and with insulins of animal origin.

Package. 3 ml in a cartridge. 5 cartridges in a blister. 1 blister in a pack.
5 ml or 10 ml in a vial. 1 bottle in a pack.
Vacation category. On prescription.
Manufacturer.
PJSC Farmak.

Location of the manufacturer and its address of the place of business.
Ukraine, 04080, Kyiv, st. Frunze, 74.