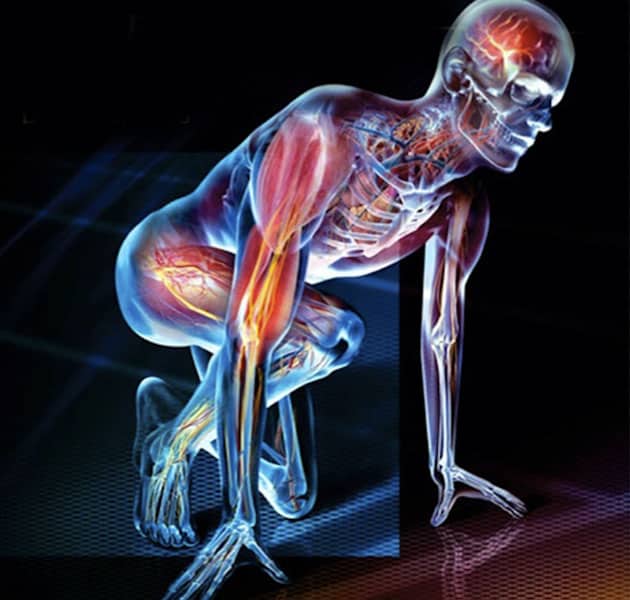 Even though in isolation, synthesized and actively experimented with for many decades now, and at this point the primary mode of anabolic action with all anabolic/androgenic steroids is to be a direct activation of the cellular androgen receptor and increase in protein synthesis. By supplementing external anabolic usage the increase of hormone levels, so does the androgen receptor activation, and finally the protein synthesis effect.

An indirect mechanism is one that is not directly brought about by activation of the androgen receptor. But the affect androgens might have on other hormones, or even the release of locally acting hormones or growth promoters inside cells. Muscle mass disposition involves not only protein synthesis, but other factors as well such as protein breakdown and tissue nutrient transport. In recent years insulin, a hormone that increases transport of nutrients into muscle cells. In which a second way of transport indirectly of protein breakdown to cause muscle growth.

Glucocorticoid one of the most important mechanisms of androgen action, these hormone actually have the exact opposite effect on the muscle cell than androgens, namely sending an order to release stored protein. In this process it is called catabolism (breakdown of muscle tissue.) Muscle growth is achieved when the anabolic effects of testosterone are more pronounced overall than the degenerative effects of cortisol.

When steroids are administered a much higher androgen level can place glucocorticoids at a notable disadvantage. In terms, when you do AAS the catabolism effect is shortened leaving room for more muscle adaptation to protein synthesis absorption. With the affect reduced, fewer cells will be given a message to release more protein, and on the long run more will be accumulated. Primarily mechanism believed to bring this effect out is androgen displacement of glucocorticoids bound to the glucocorticoid receptor site. It is also suggested that androgens may indirectly intefere with the DNA binding to the glucocorticoid response element.


Creatine, as creatine phosphate (CP), plays a crucial role in the manufacture of ATP (adenosine triphosphate), which is a main store of energy for the muscle tissues. As the muscle cells are stimulated to contract ATP molecules are broken down into ADP (adenosine diphosphate), which releases energy. The cells then undergo a process using creatine phosphate to rapidly restore ADP to its original structure, in order to replenish ATP concentrations.

With increased levels of CP available to the cells, ATP is replenished at an enhanced rate and the muscle is both stronger and more enduring. This effect will account for some portion of the early strength increases seen during steroid therapy. Personally, the result of creatine and anabolic/androgenic steroids used in combination would result in a boosted strength and size gain, and as well increasing the recovery time during exercises.

Insulin-Like Growth Factors, also has an indirect mechanism of test action on muscle mass. It has been demonstrated that increases in IGF-1 receptor concentrations in skeletal muscles are noted when elderly men are given replacement doses of testosterone. It looks like androgens are necessary for the local production and function of IGF-1 in skeletal muscle cells, independent of circulating growth hormone and IGF-1 levels. IGF-1 does have a minor effect in the muscle tissue growth in conjunction with steroid cycles.

The level of free testosterone available in the blood is likewise an important factor mediating its activity, as only a small percent is really active at any given time. It must also be noted that as we alter testosterone to form new anabolic/androgenic steroids, we also typically alter the affinity in which our steroid will bind to plasma proteins. As the higher percentage we have of free hormone, the more active the compound should be on a milligram for milligram basis.

The level of SHBG present in the body is also variable, and can be altered by a number of factors. The most prominent seems to be the concentration of estrogen and thyroid hormones present in the blood. Generally there is a reduction in the amount of this plasma binding protein as estrogen and thyroid content decreases, and a rise in SHBG as they increase. A heightened androgen level due to the administration of anabolic/androgenic steroids has also been shown to lower levels of this protein considerably.

So clearly if the level of free-testosterone can be altered by the use of different anabolic/androgenic steroids, there also exists the possibility that one steroid can increase the potency of another through these same mechanisms. Binding proteins act to protect the steroid against rapid metabolism, ensure a more stable blood hormone concentration and facilitate an even distribution of hormone to various body organs. It remains although very clear however, that manipulating the tendency of a hormone to exist in an unbound state is an effective way to alter drug potency.

Testosterone is the primary substrate in the male body for the synthesis of estrogen (etradiol), the principal female sex hormone. Estrogens presence may be unusual in men, it is structurally very similar to testosterone. With a slight alteration by the enzyme aromatase, estrogen is produced in the male body. Aromatase activity occurs in various regions of the male body, including adipose, liver, gonadal, central nervous system and skeletal muscle tissues. In large amounts however it does have potential to cause many unwanted effects including water retention, female breast tissue development (gynecomastia) and body fat accumulation. In the context of the average healthy male, the amount of estrogen produced is generally not very significant to one’s body disposition, and may actually have a beneficial in terms of cholesterol levels.

We must however not be led into thinking that estrogen serves no benefit, as it is actually a desirable hormone in many regards. Athletes have known for years that estrogenic steroids are the best mass builders, but it is only recently that are we finally coming to understand the underlying mechanisms that make this the case. This is manifested through increases in glucose utilization, growth hormone secretion and androgen receptor proliferation.

Estrogen may play a very important role in the promotion of an anabolic state by affecting glucose utilization in muscle tissue. This occurs via an altering of the level of available glucose 6-phosphate dehydrogenase, an enzyme directly tied to the use of glucose for muscle tissue growth and recuperation. More specifically, G6PD is a vital part of the pentose phosphate pathway, which is integral in determining the rate nucleic acids and lipids are to be synthesized in cells for tissue repair. During the period of regeneration after skeletal muscle damage levels of G6PD are shown to rise dramatically, which is believed to represent a mechanism for the body to enhance recovery when needed. Estrogen is directly tied to the level of G^PD that is to be made available to cells in this recovery window.

Estrogen may also play an important role in the production of growth hormone and IGF-1. IGF-1 (insulin like growth factor) is an anabolic hormone released in the liver and various peripheral tissues via the stimulus of growth hormone. IGF-1 is actually responsible for the anabolic activity of growth hormone such as increased nitrogen retention/protein synthesis and cell hyperplasia (proliferation).

Dihydrotestosterone, more commonly referred to as DHT, this hormone is in fact measured to be approximately three to four times stronger than testosterone itself. It is clearly the most potent steroid found naturally in the human body, and important to discuss if we are to understand the full activity of testosterone, as well as other anabolic/androgenic steroids that undergo a similar conversion.

Testosterone is converted to dihydrotestosterone upon interaction with the 5-alpha reductase enzyme. More specifically, this enzyme removes the C4-5 double bond of testosterone by the addition of two hydrogen atoms to its structure (hence the name di-hydro-testosterone). The removal of this bond is important, as in this case it creates a steroid that binds to the androgen receptor much more avidly than does its parent steroid. 5-alpha reductase is present in high amounts in tissues of the prostate, skin, scalp, liver and various regions of the central nervous system, and as such represents a mechanism for the body to increase the potency of testosterone specifically where strong androgenic action is needed.

Dihydrotestosterone (DHT) plays an important role in the organization and functioning of the central nervous system. Many neural cells contain active androgen receptors, and it is thought that there may even be a specific importance of dihydrotestosterone in this area of the body. Studies have shown DHT to have a profoundly greater impact in these cells compared to testosterone. Animal models demonstrated that both testosterone and DHT would result in increased androgen receptor proliferation in neural cells three and seven hours after being administered, however only DHT was able to sustain this increase at the twenty-one hour mark.

The strong interaction between the central nervous system and skeletal muscles, collectively referred to as the neuromuscular system, is of key importance to the athlete. There appears little doubt that the ability of the body to adapt to training and its ability to activate nerve endings in muscle tissue are reliant on the interactions of the neuromuscular system. Inhibiting the formation of DHT during a testosterone cycle may therefore inadvertently interfere with strength and muscle mass gains. That’s why most people complain on the sudden drop in the steroid potency when a 5-alpha reductase inhibitor finasteride to a testosterone cycle.